Democracy and a response to Hopi Sen re Jeremy Corbyn

Didn't really know what picture to post here. So googled images for democracy and this seemed pretty good to me!:

For those who don't know about him, Hopi Sen, to quote his blog, ' After the 2001 election I moved to Party HQ, before becoming the head of campaigns at the Parliamentary Labour Party' to catch up with his career to date, please go to the 'about Hopi' part of his very interesting blog HOPI SEN a blog from the backroom

I enjoy his blog, sometimes agree with it, sometimes don't. That's called democracy, the freedom to discuss and disagree if we are so moved. I don't think I have ever felt moved to disagree, much less publicly do so, until this week and his latest blog: I can’t vote for Corbyn. I won’t leave the Labour party.

This is my slightly expanded initial response to the original blog and not to the later comments and Hopi Sen's replies. That I will do later and separately in my own personna!

Very many people left the Labour Party in the time of Tony Blair [and have returned with the election of Jeremy Corbyn] because Blair then, like Corbyn now was unpopular with some Labour Party members. Meanwhile many of us stayed whilst really, really disliking Blair's political views - in my case because I wouldn't let him drive me away - but we weren't so voluble as those who seem to dislike the idea of Jeremy Corbyn for PM . We stayed because we loved our party and wanted to preserve it. And in the principle of another little word: democracy. We had been beaten in a leadership election [if you must know I had voted for John Prescott] but were not going to throw our toys out of the pram just because our choice didn't win.

So I and others stayed and in local constituency meetings expressed our views but in public supported those elected because of that little word - democracy. We didn't write blogs [OK this was pre '97 and blogging wasn't the thing] knocking Blair and his colleagues. In fact I even defended him on occasion, when he did something I admired. In subsequent leadership elections I didn't vote for his followers, something I didn't hide but when those I supported [John McDonnell] didn't win the popular vote, I once more kept my toys in the pram and - because of democracy - flew the party flag. Even though I didn't like the red rose emblem and missed singing the red flag. I still sang it as a lullaby to my grandchildren as I had to their parents.

This year I was delighted to support Jeremy Corbyn for party leader. I have followed him for many years and when he rocked up and supported a campaign I was helping run from 2009 I was of course highly delighted. But he was again the man I had admired for many years, giving his support in a constant but unobstrusive manner. At some of our demos and rallies he would mingle with the crowd, unlike some MPs [from all parties] who would shoulder their way to the front and get in all the photos but not always turn up to the debates in the House of Commons on our cause. That campaign ran for 5 years, we were successful thanks to those who supported us like Jeremy Corbyn and John McDonnell [and - to show how fair I am] others MPs from other parties. And massive financial help from Unite union. But I digress.

You may have gathered from this I have always been on the left wing of the The Labour Party Not a militant, or a 'trot', but actually a Pacifist, a member of groups like CND, Amnesty, HOPE not hate, even Stop the War [heavens forfend!] But suddenly I find myself in the press described as 'One of the Hard Left', 'An Extremist' and some less flattering titles.

When I was supporting Jeremy in the leadership campaign I constantly appealed to the 'opponents' to act, if he won, as magnaminous in their defeat as I knew our true supporters would be. You can see some of these appeals on my blog here. The comments of some since like Chuka Umunna have not been helpful, sadly, in my opinion. But in the face of democracy he is of course free to make them.

I can understand how Hopi Sen feels. It doesn't matter that he personally does not like Jeremy Corbyn's views. I understand that he is asking people not to leave the party because they can stay in the way he is staying. But I am asking him, in the name of democracy, to accept that Jeremy Corbyn is a man respected by a large part of our party. Individually we may not agree with every single thing he says either. Would it surprise Hopi to find that I part company with Jeremy over certain policy areas?  I can't believe there are any two people in the land who can agree on absolutely everything!!

I honestly believe Jeremy is a good man who has been consistent in his ideas over all the time I have known him and I trust him. Those who know me will know what a big statement that last one is for me to make. And no, I don't know all the answers. And I would hate to be in his position at the moment. But I am really happy he is there! That is not to say that Hopi Sen is not a good man, just that we differ in our views. But in the interests of the party we obviously both love and to which we both wish to remain loyal please moderate the tone of your comments about Mr Corbyn. There are enough outside the party looking for ways to harm us. without us doing their job for them.

I have always been proud that our party has been made up of those who form almost a rainbow coat of political shades. Let's tolerate the different hue that may be the latest style and sees what will come of it!

Was there a winner in the vote to bomb Syria? 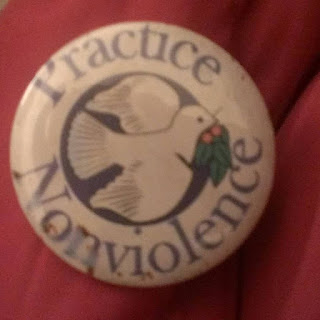 This has been a very sad few days for those of us who as pacifists want to find better ways to reach a solution to the troubles in the Middle East. I was attending a Church carol concert this afternoon, with the images in the church of the Middle East at the time of Jesus, and all the messages of Hope, Love and Peace that this time of year brings. In my head were the thoughts that the vote in Parliament last night carried with it on a "Very dark night in Parliament. [I] Will never forget the noise of some Labour and Tory cheering together at the idea of bombs falling." - as described by the youngest member of Parliament, the SNP Mhairi Black.


Listening to news reports and the comments of others on the 'Labour Party Split' supposedly engendered by the vote, I do wonder about some of the prognostications and conclusions. The following was put on a FaceBook page to which I belong which discusses current affairs and I thought it so succinct that I begged permission to put it here:


"The government won the bomb Syria vote by a lot more than 66 votes. So ultimately the Labour 'free vote' did not lead to war. What it did do is let everyone know where our [individual] MP[s] stood on the issue. Useful to know at the very least. Also when Blair went to war in Iraq 139 Labour MP's rebelled and voted against and Robin Cook resigned. 66 pro-war rebels is nothing compared to that."

So in the middle of the tragedy of war being declared, political gamesmanship is also being played out over whether or not the leader of one party is 'suitable' and whether X or Y will be the next leader. And the number crunching begins when in fact it is more important to look at the numbers of innocent people who may be caught in collateral damage from whatever side should be considered. And discussions should be ongoing in all political parties to find a better solution, not who will be more popular with the voters and who looks better on the TV and vox pop by the tv interviewers should be about the death and destruction which our representatives have just voted for not whether or not one man is popular with all those in the parliamentary party he leads. He is popular enough with the members of his party as a whole to have had an overwhelming vote to make him leader less than three months ago, and since all those who voted him - like me! - knew his views on military action once can be sure that they were in our minds when we voted. We knew the context. Read on.

Context is everything when quoting political speeches etc. Journalists know this. So always check the context when looking at a quote - the context of the time and place where the quote is made; the context of the speaker and the audience; and the context of those doing the quoting and where that quote is making its appearance. History is another important contextual fact. Looking at the actions of the British Parliament today in the light of the historical context of the last 2,000+ years gives one plenty of pause for thought.


Remembering the context that I am a pacifist in a - what I feel -is a more violent society, I expect some of you to dismiss my views. That is your right. But you will still allow me to believe I am right, I am sure. I hope and pray that the better way will be found and followed.

Anyone interested in my views may like to read more at: http://http://www.stopwar.org.uk//
Posted by Elizannie at 17:17 1 comments