So where does charity start? The Band Aid 30 single.. 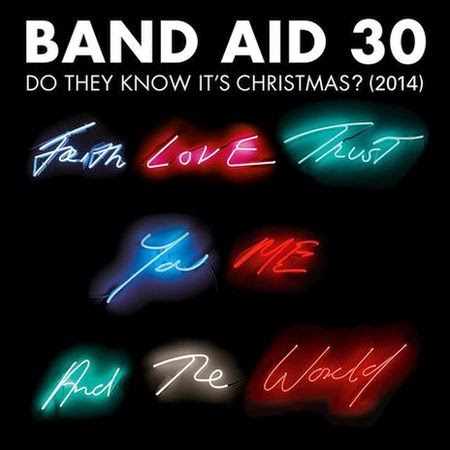 Many people have already downloaded the Band Aid 30 charity mp3 single via the internet or donated to the Ebola Crisis fund by texting from mobile 'phones, details here . [I downloaded my mp3 from amazon.co.uk] The audio CD will be released on the 8th December.

Many people already know all this, so why is Elizannie preaching about it? It could be because she is just so fed up with all the carping about the production of the song that has appeared in the press and social media in the past couple of days.

Comments regarding how the stars singing could have donated from their vast stores of money rather than 'only' give their time. How they are just 'showing off'. How the song isn't very good anyway. How the wording was [a] inappropriate or [b] could have been better.**

And for all those commentating, criticising, complaining - Where were you? If you know so much about it all, why didn't you do something to help? Looking forward to your answers.


**One such article criticising Bob Geldof appeared in the Daily Telegraph . It seems to ignore the fact that the Band Aid 30 team hope to raise money in addition to all the actions that article mentions. The fact that the author of the piece does not recognise a large percentage of the line up is not a reason to decry it!
Posted by Elizannie at 10:28 0 comments

The commodification of Armistice Day and has Christmas Advertising gone mad? Is the world standing on its head? 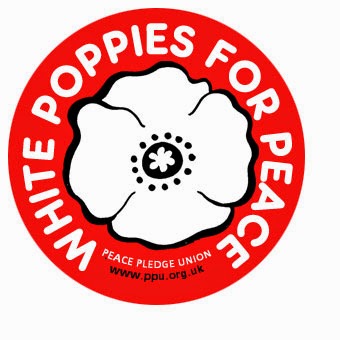 Rather a long subject title but as they say in the sitcom Miranda 'Bear With'.

Whether or not one contributes to the Royal British Legion Poppy appeal, wear a white poppy from the Peace Pledge Union as a sign of peace or a black poppy* it would appear that this year - perhaps unsurprisingly given that it is the centenary of the
outbreak of WW1- the poppy has become not only a

symbol of remembrance but also a consumer item. In the Marxist sense of the word has become a commodity as different, 'desirable' versions of it are peddled on websites and street corners. The Royal British Legion website has many tasteful items for sale; their stalls in supermarkets do not just display the simple cloth poppies and poppy badges which have been added over the past few years but other memorabilia [mugs etc] Craft shops show hand knitted and crocheted poppies, postcards and small pictures - some framed - are available too - do the proceeds go to the shopkeepers or the veteran charities? Obviously the

handmade ceramic poppies planted outside the Tower of London are a bargain at £25 each and will be a great talking point in the corner in a tasteful vase inmany a home: a part of an art installation, patriotic icon and oh yes a remembrance of one of those brave soldiers who gave those lives that others may live. If I sound cynical it is because I am - so many of those young men had no idea why they were fighting and there is still a great misunderstanding in the minds of many of the population today as to the real reasons why the 1914 - 1918 war took place.* The black poppy commemorates all those who have died due to imperialist war and its legacy: dead soldiers, dead civilians and dead conscientious objectors. Stop the War

Yet despite full page adverts in newspapers, leaflets delivered through most doors and TV advertising by the Royal British Legion it did seem that an awful lot of people were not wearing poppies this year. Hundreds of thousands went to see the poppies at the Tower of London yet there were no collecting boxes for veterans charities. And the count of the poppies there is only for the British and Commonwealth soldiers who lost their lives, not those of all And in another twist, the poppy was hijacked in another sort of commodification by some far right political groups like Britain First who used it as a symbol on social media to sell themselves and raise funds by selling badges - some bearing poppies.

And whilst I am on the subject of advertising, have you noticed something, a bit of a trend perhaps on your TV in the past few days? The big stores and wholesalers massive TV advertising campaigns costing millions of pounds each appear to be vying with each either to get some sort of title: 'The best sickly, sentimental Christmas Advert of the year' perhaps?' And meanwhile the United Nations have to ask two elderly Rock Stars to make another Band Aid type record to raise money for aid for Ebola.

So is the world turning upside down when the poppy for remembrance becomes a commodity. When a far right political group uses the poppy to raise funds for itself. When famous pop stars are reduced nearly to begging for our monetary donations to help those dying of a deadly disease. When global companies are spending millions to persuade us to part with money for commodities we don't really want or need. Christmas is a time of giving, we surely need to all decide the right direction in which our money should travel.
Posted by Elizannie at 15:24 0 comments 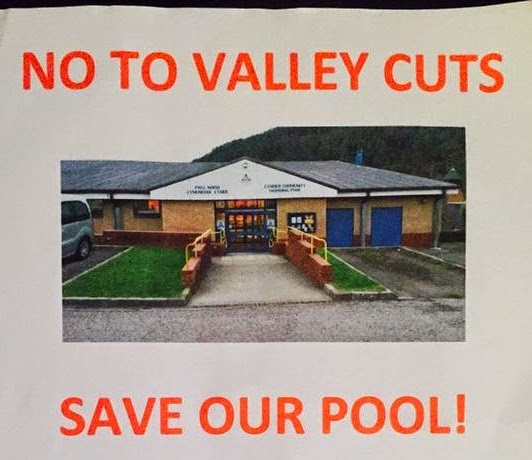 So:
John Lewis spends 11million pounds on their Christmas advertising.

Nick Clegg  spends an estimated 10million pounds trying to persuade us to 'staycation' in the North.

What if John Lewis' Christmas TV advert was a black screen bearing the legend:


We have donated our £X million of our Christmas advertising budget to the following charities.......

What if the Coca-Cola trucks were taking aid to underprivileged countries.

What if Nick Clegg/the Government's money for Northern staycations went on keeping some of the community services in small outlying districts all over Britain alive. What if then these communities could keep their libraries, community centres, swimming pools and many more social community services.


The photo above shows part of the placard from the 'Save our Pool' campaign for the South Wales village of Cymmer. This pool not only serves the residents of the surrounding areas but also provides the venue for the schools' swimming lessons.


Why am I so concerned?
My family come from the nearby village of Blaengwynfi and many years ago one of my father's cousins - aged 13 - drowned in a horrendous accident in the seaside town of Aberavon. There is a large memorial to him and his three companions in the Cymmer cemetery, built with money raised by the National Eisteddfod which was in progress in Aberavon at the time of the accident*. All children need to learn to swim. The closure of this swimming pool [and others] due to council cuts may mean many children may miss out on lessons.


BTW:
Part of the blog title  'It's only money' is taken from the song - written by Phil Lynott  & Philip Parris - of the same name. One of the verses comprises the following lyrics:

Sadly appropriate for many living under this coalition Government perhaps?

*Shown under 1932 on the timeline of http://www.historicalporttalbot.com/timeline.html
Posted by Elizannie at 16:31 0 comments