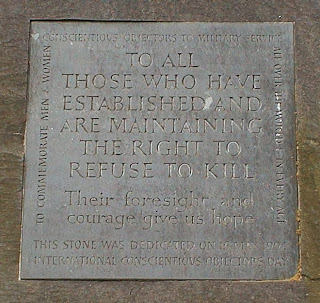 Over the past few days leading up to Remembrance Day I have taken part in many discussions/debates - virtual and real - about white versus red poppies [with a detour about purple poppies], pacifism, whether one can honour the dead and afflicted of all conflicts without wearing any poppy, whether shops should be open before the two minute silence of Remembrance Sunday and more. At times I found myself getting upset, at times verging on anger [not an emotion that I wish to feel] that some of my fellow debaters seem to almost wilfully misunderstand my views.

But one group of 'veterans' is too often forgotten and I am as guilty of this as the rest, but should feel more shame. This group is the Conscientious Objectors, those who refused to bear arms 'for their country' due to their strongly held principles, but could not always convince the tribunals who tried their cases that they should be exempt from military service. 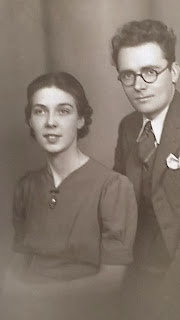 The photograph above shows my parents around 1939, the year of their marriage. As a married woman my mother was exempt from military service but was along with my father, a Conscientious Objector. My father had to appear before a tribunal and, as I understood it, had his appeal for exemption rejected because he would not rule out that he would refuse to fight in every war but stated as he had worked so hard for peace in the years before 1939 he could not in all honesty fight in this war. Again, as I understood it, he was eventually, if not totally exempted, allowed to not 'join up' as long as he retained his job which was considered to be a kind of reserved profession, a journalist [ 'alternative civillian service']

I know that the two of them went through many heart breaks and much heartsearching during the war. Both had brothers and cousins in the military and both worked with voluntary organisations in war aid efforts. I think of them every remembrance day and am so glad that they and their comrades are honoured at Tavistock Square, London on Remembrance Day every year.

To read more about Conscientious Objectors and their stories in World War I click the link here and for World War II here. 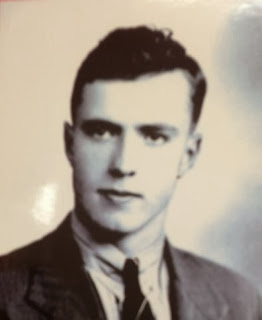 Its almost a tradition that I write a Remembrance Day blog. Not what I intended when I wrote the first one in 2010. Or the next in 2011. Or the one in 2012. And I definitely wasn't going to do it this year, but once again there has been so much discussion in the media about the wearing or not of red poppies and in political forums about the terrible principles of those who do not - or even worse wear white poppies - that I felt I had a bit more to add.

The lovely photograph above, although blurred in the copying, was sent to us from one of Other Half's relatives in Canada last night. It is of his Uncle Harry who was killed in WW2 in Belgium. We have never seen this picture before and it is therefore very precious to us, blurred or not. And that is what Remembrance Day should surely be all about. Remembering those who died or were affected in whatever conflict, on whatever side and whenever. And for us as Pacifists working toward Peace so that waste will never happen again, and that all the Uncle Harrys in future will live and meet their nephews, nieces, great nephews and nieces and great-great nephews and nieces. This Uncle Harry never met his descendants - but they still remember him and have talked about him all their lives.

Also this year my family will additionally mourn the passing this August of my lovely Uncle Ron who was taken prisoner of war at the Battle of Arnhem which left him with emotional battle scars. In the title of the book written about him by his son 'Too nice to be a soldier': 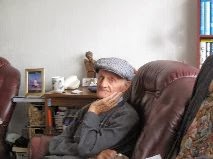 So whatever colour poppy one wears, or whether one wears one or not, do remember all those who have died. I respect others' rights to disagree with my wearing a white poppy but the surprising thing is they do not seem to respect my right so to do whilst claiming that wars are fought to allow freedom of thought and expression......