Westward Ho or Travels with my Other Half* 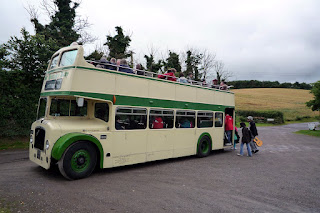 Elizannie and Other Half have just returned from another set of travels in the West Country which took in a bit of magic, a sense of awe, a bit of humility and a lot of fun. Returning to the Olympic hysteria surrounding the London suburbs/Thames Estuary was a rude awakening.

A large part of our two weeks away was shared [by arrangement] with a Gateway Club holiday. I have written about this group before, and we have been lucky enough to share holidays with the group on several occasions, but I have desisted writing about the fun we all have from a fear of sounding patronising and using the club members as examples of how we should all 'count our blessings' and rambling on about how those allegedly less advantaged are plucky etc etc, which is how too many observers too often treat the subject.

So what do I write? The truth, perhaps? That we had a good week with friends: lots of laughs, a few tears, a few misunderstandings - all in all a 'normal' week's holiday. Except that there was a lot less complaining than on a 'normal' week's holiday - the generally rotten weather was taken for what it was and it didn't stop anyone from getting on with the fun [although the sight of Other Half after a trip across the moors on an Open Top bus in the pouring rain was worth a thousand words!] Club members dressing up for evening entertainments shamed me into getting out of my scruffy jeans and t-shirts and finding skirts and make-up! No political discussions for a week was quite a relief too, really.

As always, if we had expressed our massive admiration of all the volunteer helpers they would have brushed it aside as they consider they are just on holiday helping out friends and positively do not look for thanks. But a big thank you from us to all from that particular Gateway club for letting us join with them in their fun.

The second week of our travels took us to Cornwall and - for this summer - reasonably good weather. As a 'King Arthur anorak' I wanted to climb to the top of Tintagel Castle and achieved it although I was the last of our party [despite being the youngest by all of eleven months!] to achieve the top of the winding steps! Still it was an impressive view down, and a magical feeling pertaining to King Arthur and his court too. 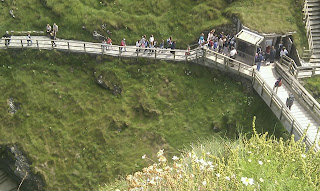 A further exploration took us on to the village of Boscastle which was disastrously flooded in August 2004. Miraculously no lives were lost but the amount of damage caused and the way that the town has recovered are both awe inspiring. Please do follow the link and read about the way that nature can be savage and man can persevere to rebuild. Our party sat outside a cafe eating scones and looking way above our heads at a sign showing how high the flood waters reached that day - which we remembered well because we were sitting very many miles further along the same coast line, in the pouring rain, enjoying a [wet] bar-be-que, with no idea of the devastation happening further down the coast.

After all these rather thought provoking experiences, it was quite a change to return to the South East and all the developing Olympic shenanigans. When we watched the latest episode of Twenty Twelve, 'Catastrophisation' on the night prior to returning home, it was as usual hysterically funny. However within twenty four hours of our return and after listening to London based radio stations we realised that just maybe some of the fictional situations we had watched could be coming true. And oh, the complaining on the airwaves! So maybe the badges we are wearing should be shared around a bit... 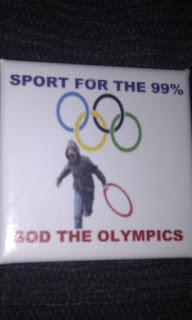 *Once more I have 'lifted' and adapted my blog title from literary sources, this time two books:
Travels With My Aunt by Graham Greene
Westward Ho! by Charles Kingsley. This book was so successful that entrepreneurs in the 19thC saw 'an opportunity' and built an hotel and other developments of the same name near where the book begins [in Devon] and eventually the village proper - Westward Ho! -developed. The only village in the British Isles with an exclamation mark in its name... but I am not allowed to put an exclamation mark in the 'Labels for this post' on this page. Oh well..
Posted by Elizannie at 09:59