Have nothing in your house that you do not

know to be useful, or believe to be beautiful.

I may have mentioned that one of my New Year Resolutions is to 'de-clutter'. This is the trendy word for getting rid of the accumulated stuff that is blocking cupboards, wardrobes, sheds and garages in the homes of the middle classes in this Capitalist, over-consuming society. And of course it has become trendy to 'de-clutter' with whole TV programmes, web-sites, businesses, media articles and too much more dedicated to the subject. If you don't believe me, google!

I've even bought a book about de-cluttering - Living More With Less, by James Wallman .  In true devotee style I have had the book delivered to my kindle rather than clutter up my [almost] decluttered bookshelves....

Bear with me. This is not going to be another one of those 'clear your living space and clear your mind and soul' polemics. In fact it will probably turn into one of those Elizannie rants when I wonder how society has come to this pass?

One may have various reasons for de-cluttering. Mine, apart from a desire to see the floor of my wardrobe[s] and the backwall of my bookshelves is the impending incoming of more family members, the smallest one of whom will take up more space per capita than his grandmother. Others of my age may be [using the modern parlance] 'downsizing' - we used to say moving somewhere smaller.

Don't expect to make a fortune from things kept so long that 'they must be worth something'. Checking online, beautiful books are only fetching a penny thanks to mass cheap publishing and e-publishing; wedding present linen is scorned as it won't tumble dry and needs ironing; ditto crockery and cutlery, even those still in their boxes are not fetching a lot but always quote the 'marque' - and nobody seems to use fish knives and forks anymore!; dark brown furniture is definitely 'out'. 'Vintage' is in, but beware, it has to be the right vintage. However, my handbag obsession has paid me back reasonably well, but good photos seem to help and if you have a handy professional photographer on hand for anything for sale it does seem to help!

Consumer society will love, nay encourage us in de-cluttering. New businesses have set up to do it for us if we can't quite get the hang of it. We can be sold clever books about it and then when we have done it and decided we can't just manage with 100 items - or whatever the latest buzz is - we will re-buy everything of which we have faithfully [in the true sense of the word] disposed. Hopefully ecologically by selling or recycling or in an approved fashion, by donating our 'clutter' to those less fortunate who would love to have enough possessions to think of de-cluttering. It will probably become our patriotic duty to de-clutter, then re-clutter to kick start the economy and beat the austerity. Win win.......

Of course there are many who will be superior to those of us trying to jump on the de-cluttering lifestyle. Those minimalists who have been around since the 60s for instance. I tried to be one but as soon as children arrived and I started shelving all those lovely little keepsakes like first teeth, first curls, first pictures, first paintings I lapsed to my hippy roots of carrying my world with me. And then other considerations collide: as a historian, should the wedding album survive the marriage parting for the sake of future generations? And that despised-when-it-sat-on-great-Nan's-mantelpiece ornament, but which she really loved and now I love for her sake piece - how can that ever be de-cluttered?

Telling a friend about this blog, apparently Janet Street-Porter got there first in the Daily Fail, which I wouldn't have known as the paper is not on my reading list. But I like JSP and the internet is a wonderful tool so if you would like to share her thoughts please do so here. She seems to agree with me that de-cluttering is probably better in thought than in deed.

But I would wholly recommend decluttering the mind. Much easier said than done, I find. And especially important with the General Election on the horizon and getting closer every day. Decide what is worth worrying about, what one can change and what one can do. In life, emotions and politics probably the best clutter we can deal with, one day at a time. The quote at the top of the blog from William Morris can equally well apply to Houses, Souls and Minds.
Posted by Elizannie at 14:04 2 comments 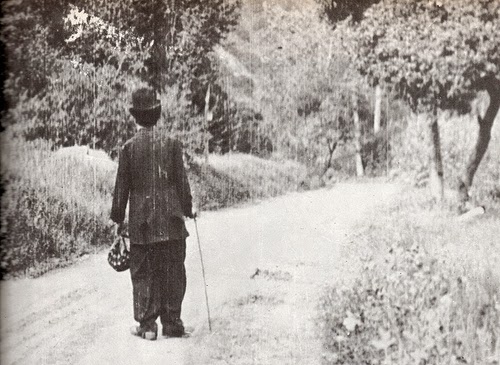 It may have escaped your notice, but Elizannie has been missing for a while. Although this blog has the title of an apology, it isn't really. So it's a bit of an oxymoron in truth.  It contains explanations of a sort, extremely late seasons greetings for the month of December and Happy New Year wishes for 2015. Elizannie's absence was due to extenuating family circumstances topped up with a severe chest infection. The latter was cured by our wonderful NHS and although there were times when the whole blog idea looked as if - like the little tramp* - it would disappear off into the distance it is back and metaphorically sharpening its quill pen ready for a few acerbic political attacks in the months running up to the General Election. Deep joy.

Of course, the past weeks would not have been 'normal' in the Elizannie household without 'happenings'. Like the Christmas morning happening when assembled adults and very small children were locked out on the front door step on their return from church because - in a very complicated process of events - Elizannie had managed to double lock all out into the frosty morning. Suggestions from three year old Granddaughter that if we could get Father Christmas back with his magic key he would let us in were studiously ignored. Eventually Son-in-law and Lovely Neighbour managed to break in through the most 'vulnerable' entrance which never the less took 45 minutes, heavy machinery and a bill for quite a lot of money when the locksmith and carpenter were contacted after the Christmas break. Looking on the positive side it will provide a good story for many Christmases to come: 'Do you remember that Christmas when Nana Elizannie locked us all out whilst the turkey was burning in the oven?'

The change over to vegan cooking for those not eating turkey was a great success, so much so that the actual vegans did not actually get a lot of this Christmas cake as it was - imo - the best ever home made cake. And incidentally contained no alcohol whatsoever: 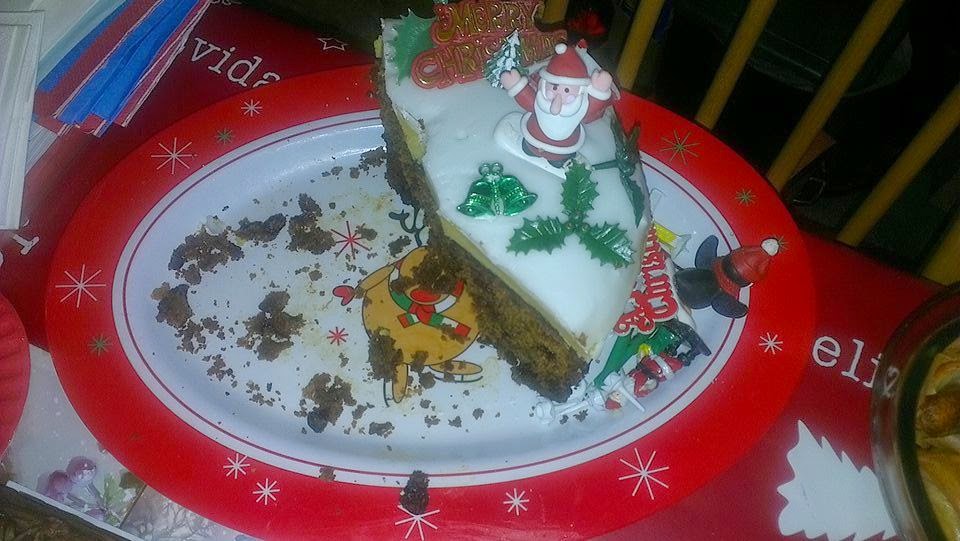 New Year's resolutions were the usual: Write that book, de-clutter and a new one this year, to try and conquer the fear of going out on my own. And the big news is that I managed - with the help of copious amounts of Bach's 'Rescue Remedy' to get to my local shops on the second of January. So very small steps for [this] woman but ones upon which to build.

And as for de-cluttering - this could become a national campaign. It is truly empowering, except at bedtime when one has forgotten that the bed still has detritus covering it. May even find that bracelet lost in 2004, who knows? But this could also become a metaphor for all of our minds too, especially with a General Election looming. We need to de-clutter our thoughts to enable us to decide between all the 'lies, damn lies and statistics'^ to which we will be 'treated' by politicians and media in the next months.

Which brings me in one of Elizannie's normal, circuitous routes back to one of the comments in the first paragraph - the political attacks. Whilst lying on the settee listening to  new radio and struggling to breathe but truly thankful for my free antibiotics which not only killed the chest infection bugs but a few others which had been hanging around [and would have killed bubonic plague and anthrax according to the notes on the internet when consulted. Which is a good reason never to look up drugs and symptoms on the internet] I heard reports of Nigel Farage's latest pronouncement. This is neatly explained in this Guardian article, so I will leave it to it to explain for now and write my own rant another day when I am fully restored to full ranting breath!:
http://www.independent.co.uk/news/uk/politics/nigel-farage-nhs-might-have-to-be-replaced-by-private-health-insurance-9988904.html

I have lived in a country where the second question that is asked when one visits a doctor after 'Name?' is 'Insurance Company' - before 'What's Wrong?' And depending on the answer to the second question is the treatment [if any] for the third question. I know what it is like to get a medicine that is not strong enough to treat one's ailments successfully. In that situation and offered the chance to pay more to 'supplement' medical costs once again the haves win out.

I will just leave you all with the last thought, would you trust our NHS to this man?: 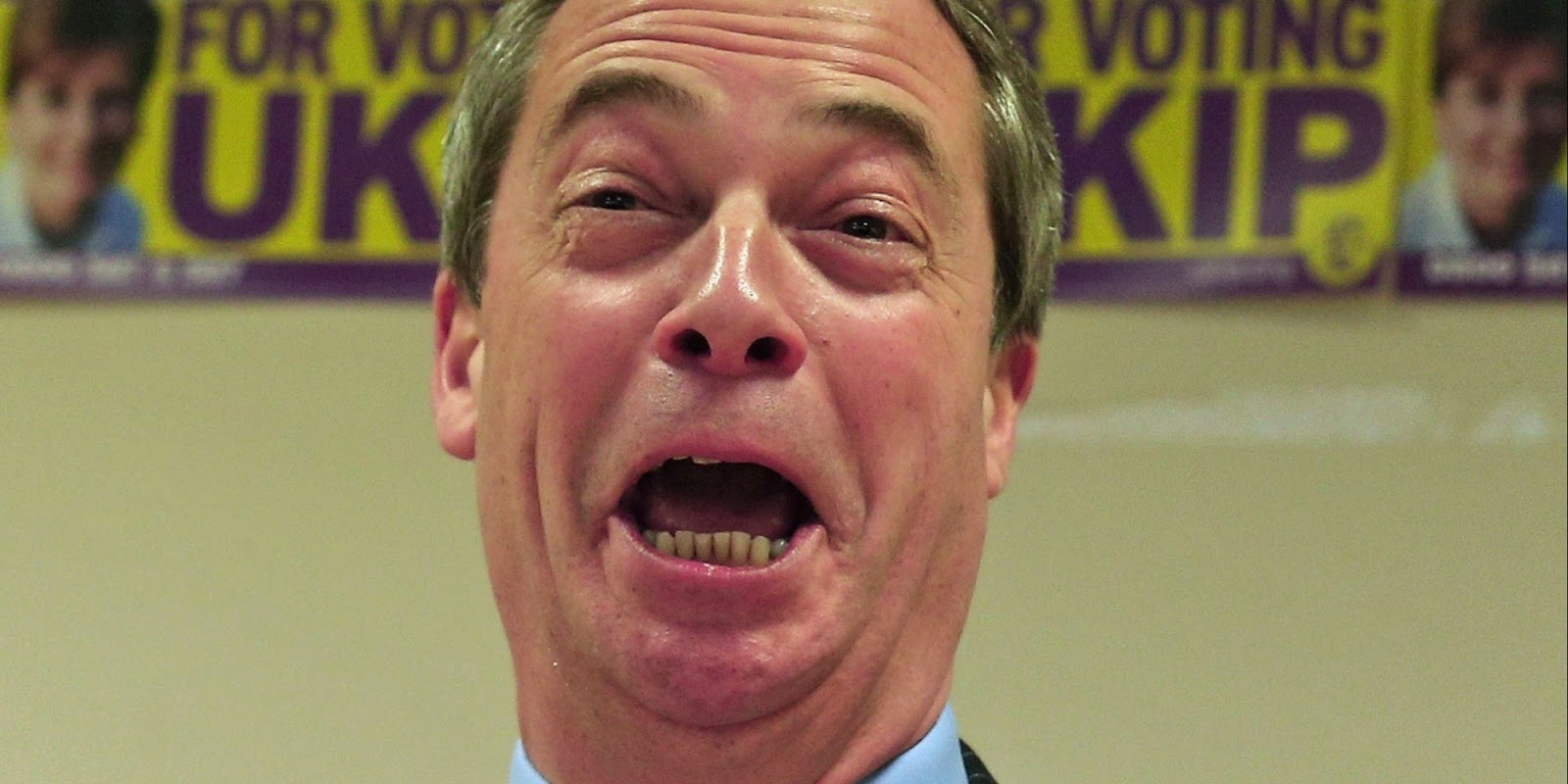 *The photograph is from the end of the 1915 Charlie Chaplin film The Tramp
^Often attributed to Benjamin Disraeli, but this is not confirmed. Mark Twain attributes it to a 'Wise Statesman' but whether or not he meant Disraeli or in fact it is Twain's own comment is unclear.
Posted by Elizannie at 12:26 0 comments