Dickens' "A Christmas Carol" and its relevance today 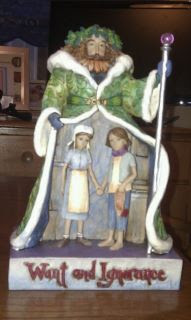 I want to look at A Christmas Carol from a different, less literary perspective to the usual discussions at this time of year. I want also to look at it’s impact on society and popular culture from it’s ‘birth’ and its relevance to the present day.Very many people may not have read Dickens’ story but ‘know it’ never the less, either from one of the many film adaptations or from hearing the story read somewhere. It has never been out of print since it was first published in December 1843. So many names, phrases and ideas from the story - and remember it is not much more than a long ‘short story’ - are in every day parlance and our collective consciousness: “Bah humbug!”; “God Bless Us Everyone”; “Marley’s Dead”; Scrooge; Tiny Tim; The Ghosts of Christmas Past, Present and Future; Bob Cratchit and more....

Why has it been around for 164 years and is still going strong? There have been many theatre and film dramatisations and it can be seen in children’s cartoons as well as in ‘serious’ dramatic versions. At Christmas time every year there are new lovely children's versions produced and every couple of years a new film version seems to arrive.
Dickens manages to create believable characters, communities and families in this shortish story. Because it is a shortish story and although he does not have time to ‘build’ on these characters, it was no mean feat to have produced such a memorable tale in such a short piece of writing. Perhaps it was Dickens’ journalistic training that gave him the tools to produce this story, perhaps it was because he had a passion for the story and the message he wanted to spread? You decide. It may be appropriate to ask what were Dickens aims and objectives when writing A Christmas Carol. What do we think they might have been? Possibly to make money? Sell his magazine? Change society by getting a message across? Or a mixture of these?

Well, he probably had several reasons, some altruistic, some financial. Dickens was not having a good time financially, he was half way through the serialization publication of Martin Chuzzlewit, which was selling badly and he was consequently being threatened by his publishers with a reduction in finances. At home, his fifth child was on the way and Dickens needed money! So the idea of publishing and selling a Christmas tale to boost his finances was obviously a very good idea!
However Dickens had been shocked by the Royal Commissionon on the working of the Cornish Tin Mines and was worried about the employment of children and had been preparing to write an article on this. Also in October 1843 Dickens had been fund raising for the Manchester poor and possibly the idea for the story had begun to ‘grow’ then. Dickens had stayed with his older sister Fan (Mrs Henry Burnett), who had a young son who was frail and disabled. Dickens shared a platform with Disraeli and Cobden, and spoke about Ragged Schools which he had visited during the previous month. So the idea of writing a story which illustrated the plight of the poorer part of contemporary society to highlight the need for social reform must have also been an important motive for Dickens.

Dickens took sole control [printing, arranging the illustrating etc] of his Christmas story to maximize profits but was so eager for it to ‘look good’ that he did not gain the profits he had hoped. The story was ‘pirated’ [a dramatic version from a pirate copy was staged within a couple of months!] and although he took offenders to court the legal fees ate up monies he had made from the high book sales. But there was an excellent long term effect because A Christmas Carol helped bring Dickens’ work back to popularity and set a ‘trend’ for Christmas stories and – more importantly – certainly caused a pricking of the national conscious!

Looking at the story in the context of the times that it was written explains some of the devices Dickens employs in his work. For instance there are references to the Industrial Revolution in the chains that surround Marley’s ghost. The exploitation of the poor [and especially children] such as the Cornish Tin Miners can be seen with the street urchins and the beggars and the children of Christmas Present: Ignorance and Want. The fact that the two gentleman are taking up ‘subscriptions’ for the ‘Poor and Destitute’ shows the 19th century Patriarchal Society in full flow, and the thought of the ‘deserving poor’ is not far behind. Scrooge mentioning the Treadmill, Workhouses and the ‘Surplus Population’ reference current political theories such as those of Malthus and Bentham.

There are many misconceptions about the book - almost as many as there are film adaptations!:

"Forgive me if I am not justified in what I ask,” said Scrooge, looking intently at the Spirit’s robe, “but I see something strange, and not belonging to yourself, protruding from your skirts. Is it a foot or a claw?”
“It might be a claw, for the flesh there is upon it,” was the Spirit’s sorrowful reply. “Look here.”
From the foldings of its robe, it brought two children; wretched, abject, frightful, hideous, miserable. They knelt down at its feet, and clung upon the outside of its garment.
“Oh, Man! look here. Look, look, down here!” exclaimed the Ghost.
They were a boy and girl. Yellow, meagre, ragged, scowling, wolfish; but prostrate, too, in their humility. Where graceful youth should have filled their features out, and touched them with its freshest tints, a stale and shrivelled hand, like that of age, had pinched, and twisted them, and pulled them into shreds. Where angels might have sat enthroned, devils lurked, and glared out menacing. No change, no degradation, no perversion of humanity, in any grade, through all the mysteries of wonderful creation, has monsters half so horrible and dread.
Scrooge started back, appalled. Having them shown to him in this way, he tried to say they were fine children, but the words choked themselves, rather than be parties to a lie of such enormous magnitude.
“Spirit! are they yours?” Scrooge could say no more.
“They are Man’s,” said the Spirit, looking down upon them. “And they cling to me, appealing from their fathers. This boy is Ignorance. This girl is Want. Beware them both, and all of their degree, but most of all beware this boy, for on his brow I see that written which is Doom, unless the writing be erased. Deny it!” cried the Spirit, stretching out its hand towards the city. “Slander those who tell it ye! Admit it for your factious purposes, and make it worse. And bide the end!”
“Have they no refuge or resource?” cried Scrooge.“Are there no prisons?” said the Spirit, turning on him for the last time with his own words. “Are there no workhouses?”
The bell struck twelve.

‘Spirit,’ said Scrooge, after a moment’s thought, ‘I wonder you, of all the beings in the many worlds about us, should desire to cramp these people’s opportunities of innocent enjoyment.’
I?’ cried the Spirit.
‘ You would deprive them of their means of dining every seventh day, often the only day on which they can be said to dine at all,’ said Scrooge. ‘Wouldn’t you?’‘I?’ cried the Spirit.
‘You seek to close these places on the Seventh Day,’ said Scrooge. ‘And it comes to the same thing!’‘I seek?’ exclaimed the Spirit.
‘Forgive me if I am wrong. It has been done in your name, or at least in that of your family,’ said Scrooge.
‘There are some upon this earth of yours,’ returned the Spirit, ‘who lay claim to know us, and who do their deeds of passion, pride, ill–will, hatred, envy, bigotry, and selfishness in our name, who are as strange to us and all our kith and kin, as if they had never lived. Remember that, and charge their doings on themselves, not us.’
This passage is relevant to the present day because the Spirit is telling Scrooge that those who are ‘interpreting’ religion are twisting it to suit their own ideas. Still happens, sadly.

The Ghosts: my intrepretations!

There are other theories such as Freudian: The Id, the Super Id and the Ego: Regina Barreca[1] links the three spirits to the Freudian dimensions of personality, “the Spirit of Christmas Past . . . with Scrooge’s id impulses (the emotional, irrational child – ‘I want it and I want it all now’), the Spirit of Christmas Present with his ego [Ego too strong = extremely rational and efficient, but cold, boring and distant ]. . . and the Spirit of Christmas Yet-to-Come with his super-ego (to imagine the effects of his actions on himself and others. The Superego is the last part of the mind to develop. It might be called the moral part of the mind. . . .)”

Has the book made any difference within society? After we have read the book we may understand why Scrooge became like he did pre Ghost visits – but not excuse him. Can A Christmas Carol be read on two levels? On one level as almost a fairy tale about a rich, selfish man who eats the wrong sort of supper, has a nightmare which is real enough to make him realise that he is wasting his life and the riches he is amassing and could lead a better and happier one helping others and when he wakes he does. The other level is a deeper warning about how laissez faire economics can eat away at society from within and whilst killing off ‘expendable parts’ in the form of ‘surplus population’ something more precious and vibrant – happiness and innocence – will also be lost unless the selfish giant [to borrow from the future yet to come, Oscar Wilde] becomes less selfish a sterile and unloving, uncaring society will develop. Is this the reason that the story is still popular – because deep down we all know that we cannot afford to forget it? Charity is not just good for those who receive it, it is good for the giver too? Are there lessons there still for all of us and for our present government?

The biggest ongoing lesson, and one we should never forget are the two children, Want and Ignorance. They are pictured above, a little 'statuette' which I bought in Glastonbury. Those children constantly remind us that if the children of the world are allowed to grow up surrounded by Want and Ignorance we are - in the words of Private Frazer - all doomed. As a Christmas Wish: "Please do not let this happen".

My twin Clarice has written a literary appreciation of A Christmas Carol here: http://villiersroad.blogspot.com/2011/11/christmas-carol.html

[1] Professor of English Literature and feminist theory at the University of Connecticut
Posted by Elizannie at 17:25