Give Peas a Chance 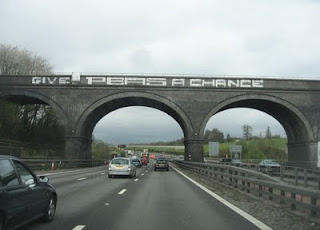 Pretty ironic that my last blog on Saturday afternoon should be entitled 'Blessed are the Peacemakers' considering the events since last Saturday evening. Like many others I have watched horrified as what started as a peaceful demonstration in Tottenham became the 'justification' for many to join in mob disorder and criminal behaviour across the country, starting in London and now spread to many big towns and cities.

The peaceful demonstration was completely understandable. As someone who has taken part in very many peaceful protests - often for peace! - I would plead that no-one should ever suggest that the subsequent mob behaviour from Saturday onwards will become a reason for disallowing future peaceful protests. But on this occasion why did this events turn so quickly into such frightening, mindless pandemonium?

I have many friends and family in the London areas alone that were very near to some of the areas that were in trouble. Really worrying. Let's make it clear - the sort of violence most of us watched on our TV screens cannot be excused. There may be 'reasons' why [mostly young] people were acting this way, but they are not 'excuses'. Just as when David Cameron said:

'Things got out of hand & we'd been drinking. We smashed the place up & Boris set fire to the toilets.' 1986 on the Bullingdon Club.

that was the reason for the behaviour, not the excuse. There cannot be justification for anti-social behaviour of any sort, whatever one's class and status in society and appropriate punishment should be meted out. [I am not being clever by dragging David Cameron into the fray - just pointing out that these sort of idiotic happenings - usually fueled by drink and/or drugs - can happen anywhere, anytime]

But what should be asked in the current circumstances is why since the weekend these criminals across the country have felt that they wanted to attack and destroy what was often their own community? Do they not feel that this is their own community? Have they no sense of 'ownership', no sense of a place in or committment to society - could it be because they have after all been brought up since Maggie T made her famous 'there is no such thing as society' remark? Does 'society' really not exist now? Oh I really do hope that is not how these people think.

Maybe some of the 'reasons' trotted out by sociologists, psychologists, commentators are right, maybe some are wrong, maybe some still to be aired will provide better answers - but whatever else we do we must all understand that saying 'something must be done' is not enough. There is such a thing as society - David Cameron and his vaunted 'Big Society' is a country mile away from what should be the real thing. Our politicians need to go back and look at its infra-structure. They must realise that until it doesn't matter where each citizen lives, until all citizens have equality in all things like access to free education, medical services, protection by the law [so that 13 year olds in inner cities do not feel it necessary to carry a knife for protection, for goodness sake], access to all manner of social services [to name a few: libraries; marriage guidance centres; youth clubs; welfare clinics] etc etc and the tax system is fair and big companies are not legally avoiding paying tax in the country in which they made big profits maybe, just maybe we are all sitting on a tinder box that could ignite again.

My facebook good night message last night was - broadly - to say that I hope peace would break out over night. A Beloved One replied 'Give peas a chance' - a lively pun on the wonderful John Lennon composition. So the blog title is what it is and the photo above is of the Amersham viaduct over the M25 under which we often drive when coming toward London. It always cheers me up.
Posted by Elizannie at 15:05