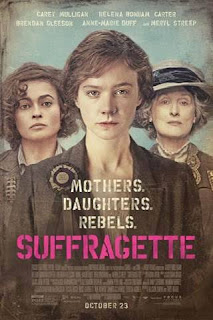 Warning: there is a 'Risque warning' on the penultimate paragraph


I went on a 'Females of the Family' outing to see Suffragette at the cinema this week. I thought it was a great film and would recommend it to you all, however this is not written as a review but as a musing upon the position of women in society since 1912, the year in which the film opens.


I have written before in celebration of the politically active women I am so proud to have in my family tree! If you haven't read it, Is Political Activism Hereditary? which I wrote in 2008 explains about these lovely women. 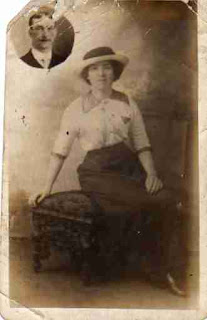 My political activist Grandmother, the original Elizannie
[and Grandfather, another politico] circa 1913.

So watching the film with my family, sitting with my 13 year old granddaughter who has already been on a political rally with me and been interviewed on television about the reasons for her attendance on that occasion, led to me pondering how far we 'working class' women have really come.


Obviously, remembering the way the working class women in the East End - portrayed in the film so ably by Cary Mulligan and Anne Marie Duff - were treated when at work and in their living conditions, 'working class' women and men are  undoubtedly better treated just over 100 years later. In the film men are expected to keep their wives in order, to behave and a good slapping if they 'misbehave'But I am also thinking about the way women are still viewed in society as a whole. Listening to & watching/studying lots of media programmes and reading lots of articles and books I have always been struck by how many women still complain that when they come home from work they are still expected to 'run' the home and family. And how many still allow their husband/partner to have the last word.


And it doesn't always apply to the view of 'working class women'. I remember reading a comment many years ago made by the actress, comedienne and writer Maureen Lipman. Her husband, the writer Jack Rosenthal was then alive and Ms Lipman had just published a book or an article and someone asked her if he had written if for her. An empty headed comedienne obviously could not have written something herself. I have found myself that when producing politcal stuff I have been asked if my then other half 'helped' me! Mind you, I was only asked that once. I once mentioned, very many years ago, to another [male] political activist I had campaigned with for many years, that I had started a degree course. He said 'What in, pizza making?'. He apologised later .....


I have always been an independent thinker and decision maker. I come from a family of independent women, as I as so proud to repeat. Possibly that is why Other Half became ex! However although that hasn't changed the way I run my life, it has noticably changed the way I have been treated by society! So much so that I find I have had to talk about my sons when asking for quotes from workmen or my boyfriend when buying goods to get taken seriously. When I had an Other Half lurking this didn't seem necessary and I find it totally annoying. When I discovered that my computer had been hacked I actually had expressions of disbelief from friends, especially males - who thought me incapable of such knowledge 'as a woman' but admitted that they would not know how to find such a thing. Well I did know, found it, sorted it and got the culprit to admit to it. Yes I am a woman. And incidentally know these things. Although I am not a very good cook. But I can set up a new lap top and email account when I have been hacked.


Risque Warning:
So always remember, we women have so much strength. As the old saying says, 'If men had periods they would go to bed and call their Mum. And their Mums would come .......'


Nb: 'Working class' is a term far more difficult to define in the 21st century when compared to pre WW1. So I haven't tried and leave it up to the reader to make their own decisions!
Posted by Elizannie at 13:18 0 comments